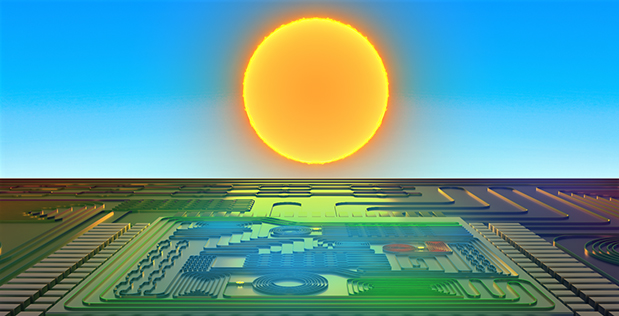 The potential of a class of materials called perovskites to enable solar cells to better absorb sunlight for energy production is widely known. However, this potential has yet to be fully realised, particularly under real-world operating conditions.

The discovery by an international team of researchers, led by Monash University and Wuhan University of Technology, could lead to improved solar cell technology and provide another step towards reducing the use of fossil fuels for energy.

Placing such a perovskite solar cell on top of a silicon solar cell, known as a tandem solar cell, can effectively boost the overall performance of the stack up to roughly 42 per cent.

The research team used the imaging and diffraction protocol developed at the Monash Centre for Electron Microscopy (MCEM) to study the crystal structure of a range of perovskite solar cell materials in their pristine state.

Lead corresponding author, Professor Joanne Etheridge, Director of the MCEM and Professor in the Department of Materials Science and Engineering, said disruptions in the periodic crystal structure can have a strong influence on the material’s electronic properties.

“Being able to map the local crystal structure of a thin film of perovskite light absorber and correlate this with the overall solar cell device performance provides exciting new insights into how device performance can be improved,” Professor Etheridge said.

Lead author, Dr Wei Li from the Wuhan University of Technology said: “To make a good solar cell, a material must be able to transform sunlight into electricity efficiently and do so outdoors for many decades.

“Producing electricity from light involves absorbing photons to generate excited electrons, separating these electrons from the holes they left behind before they recombine, and finally extracting the separated electrons and holes in an external circuit.

“How these charge carriers behave within a crystalline semiconductor, and subsequently affect the overall performance of a solar cell, strongly depends on the crystallographic properties of the material.”

The research team was able to control the presence of certain types of crystal defects - intragrain planar defects - by tuning the chemical composition of the perovskite films.

Planar defects are imperfections in the arrangement of atoms that occur on certain crystal planes.

The type and density of these defects in MA1-xFAxPbI3 (a type of perovskite solar cell) was changed by tuning the ratio of the small methylammonium (MA) molecules relative to the large formadinium (FA) molecules.

The compositions that contained no intragrain planar defects had the best solar cell performance. This research suggests that such crystal defects can have an important influence on perovskite solar cells and may be a factor limiting their current performance.

“For example, a blacksmith introduces defects in hot steel by hammering it, locking the defects in by quenching the steel in water, making the steel harder but less malleable as a result. In conventional silicon solar cells, however, defects are often associated with shorter charge carrier diffusion lengths and lifetimes, resulting in lower power conversion efficiencies,” he said.

“We found a similar reduction in performance with the presence of these intragrain planar defects in these perovskite solar cells. We hope that our work can make a contribution towards a fossil fuel-free future based on the abundant availability of sunlight.”

Funding partners for this study include the ARC Centre of Excellence in Exciton Science, the ARC Discovery Program, the Australian Renewable Energy Agency (ARENA), the National Natural Sciences Foundation of China and the Hong Kong Research Grants Council.